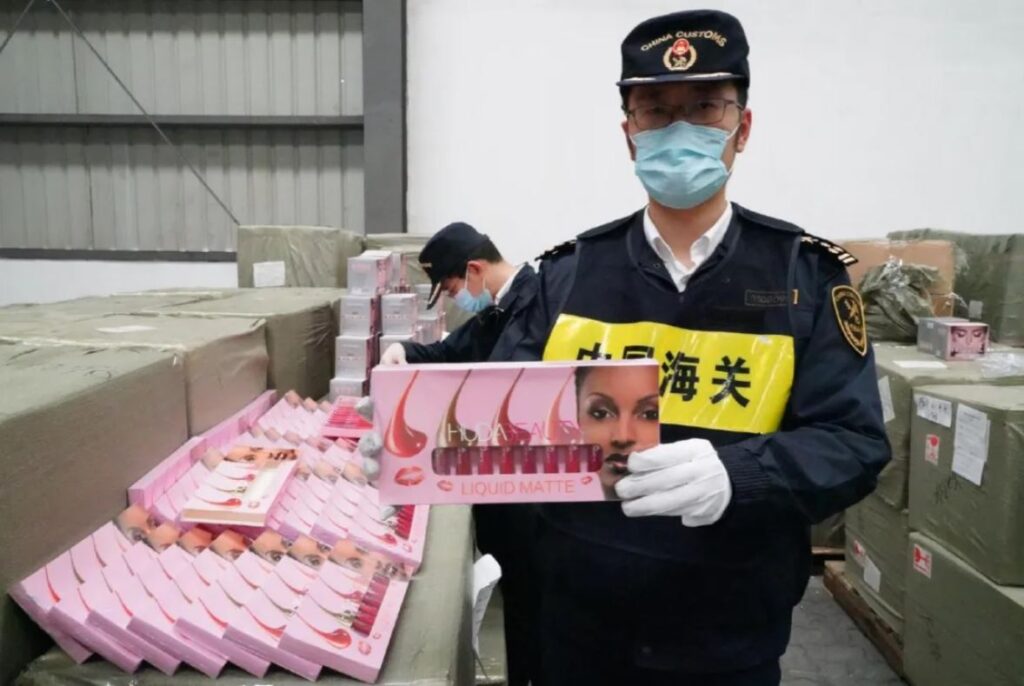 The following are the 11 cases as summarized by Customs:

1. Case regarding infringement upon the exclusive right to use the trademark “Lao Gan Ma + Head Portrait” found by Ningbo Customs in the export and freight channel. During the inspection, customs officers found 5,788 containers of food including beverages, soy sauce, and instant noodles having the trademark “Lao Gan Ma” declared for export by a company. The Customs officers conducted a comprehensive inspection of the circumstances and packaging of the goods to determine the suspected infringement. Guiyang Nanming Lao Gan Ma Flavor Food Co., Ltd., the right holder, was contacted and confirmed the seized products were infringing .

2. Case regarding Infringing Clothing Seized by Import Freight Channel of Ningbo Customs. The Customs General Administration seized 26,297 pieces of clothing infringing upon the exclusive right to use the trademarks of several well known brands including “HUGO BOSS”, with a total case value of about 800,000 RMB. During the inspection, the customs officers found that a batch of clothing  imported by a company had its labels cut off potentially as a new method of concealing infringement. Customs immediately initiated a voluntary protection procedure, and upon confirmation of the right holder, all of the clothing were found to be infringing products. The case is currently under further investigation.

3. Case regarding Suspected Infringing Bearings Found by the Export Freight Transport Channel of Ningbo Customs. During inspection, the customs officers found that a company had declared a batch of polyester cloth, bearings and other goods to the customs. The container had a batch of bearings packed in blue cartons, manufactured poorly, and the trademark “HCH” is clearly printed on the 200,000 cartons. The inspectors immediately concluded that the suspected infringement was serious. Upon confirmation of the contact right holder, Huanchi Bearing Group Co., Ltd., all the products were determined to be infringing products. At present, the Ningbo Customs has imposed an administrative penalty of confiscation and fine.

4. Case regarding Infringement upon Cosmetics Found by Ningbo Customs through the channel of export and freight transportation. The Customs General Administration seized 53,300 lip glosses, 3,600 mascaras, 288 make up primers, 1,080 powder solutions and other infringing cosmetics under the trademark of “HUDA BEAUTY,” “MAC,” “ST. IVES””L’OREAL” “Maybelline,” and “DIOR.” Customs officers found that the goods labeled as “Plastic Brush” actually contained many brands of cosmetics during inspection. After the inspection of the goods, which were unpacked and emptied into a trunk, the customs officers made a comprehensive judgment that there was a suspected infringement. Upon contact with the intellectual property right holder, the infringing products were confirmed as infringing. At present, the Ningbo Customs has transferred the infringement case to the public security department for further investigation and expansion.

5. Lianyungang Customs Office affiliated to Nanjing Customs (a case regarding seizure of glasses suspected of infringement upon the exclusive right to use a trademark). The customs office seized 108,774 glass bottles with a value of 77,841 RMB which were suspected of infringing upon the trademark “ROYALEX” recorded by Jiafeng Industrial Co., Ltd. at the General Administration of Customs. The business entities that shipped this batch of goods was not listed as a the lawful user per official records of the customs’ protection of intellectual property rights, and afterwards, the right holder confirmed that this batch of glasses was infringing. At present, Lianyungang Customs has detained the glasses, and the case is under investigation.

6. Xuzhou Customs Office affiliated to Nanjing Customs detected a case regarding suspected infringing stickers. When examining the stickers, the customs officers found that 120,000 sheets of stickers of a company in Shandong Province for export were labeled with “DISNEY.” Upon confirmation by Disney Enterprises, the trademark holder, this batch of stickers is an infringing product. Xuzhou Customs filed a case in accordance with the law, and imposed an administrative penalty imposed upon the infringing enterprises.

7. The Beijing Customs has successively seized cigarettes suspected of infringing upon the right to the exclusive use of a trademark through the mail channel. It was found upon examination that there were  cigarettes bearing the word “NANYANG BROTHERS” inside 504 packages mailed out of China, totaling 374,400 cigarettes. The customs officers judged that the  the cigarettes were produced in Hong Kong, China were unusual and the packages were shoddy and therefore suspected of infringement. Upon confirmation of the right holder, Nanyang Brothers Tobacco Co., Ltd., all the above cigarettes were found to be infringing. At present, the Beijing Customs has detained all the above-mentioned cigarettes and placed a case on file for investigation.

8. Case regarding Infringement upon the Exclusive Right to Olympic Symbols by Sports Goods Seized by Tianjin Customs. During the process of inspection of sports equipment declared for export by a company in Baoding City, the Customs General Administration found that 1,958 belts  used the “Olympic Five Rings” sign, and sewn the words “OLYMPIA GO,” and was suspected of infringement. Upon contacting the China Olympic Committee, it confirmed that the goods infringed upon the exclusive right to the Olympic symbols, and applied for customs protection. Customs has initiated the case-filing detention procedure.

9. Case regarding Infringement upon the Exclusive Right to Use a Trademark by Insulation Nails discovered by Tianjin Customs. The customs office seized a batch of insulation nails in 712 boxes of goods declared for export by a company in Xingtai City, Hebei Province, and suspected of infringing upon the exclusive right of the Hailyde Co., Ltd. to use the trademark “HILTI” which had been registered with the General Administration of Customs. Hailyde Co., Ltd. confirmed  that the goods were not manufactured under its authorization. At present, the rights owner has submitted to Tianjin Customs a written application for detaining the infringing goods and a guaranty, and Tianjin Customs has initiated the follow-up procedures for case filing and detainment.

10. Rongcheng Customs Office seized infringing clothes in cross-border e-commerce channel. A total of 61 batches of T-shirts suspected of infringing on “golf” and other trademarks were seized in the case, with the value at issue being about 9,735 RMB. Upon examination, it was found that the aforesaid 61 batches declared for export had the marks of golf and other brands, but the quality of the clothes was poor, the packaging was shoddy, and there was a big difference between them and the genuine clothes. After that, the parties admitted that all T-shirts were infringing .

11. Joint customs cases in Guangdong, Hong Kong and Macao to find infringing goods. The Guangdong Branch of the General Administration of Customs took the lead in jointly carrying out a joint law enforcement action for the customs protection of intellectual property rights between customs offices in Guangzhou, Shenzhen, Gongbei, Huangpu and Jiangmen within the province and customs offices in Hong Kong and Macao. In the operation, Customs in Guangdong region seized more than 2.42 million pieces of infringing goods; Huanggang Customs, affiliated to Shenzhen Customs, seized about 4,000 bags, leather goods, glasses, clothes and other suspected infringing items from a company in Guangzhou that was exporting; Fenggang Customs, affiliated to Huangpu Customs, seized a 1.025 million sheets of stickers which were declared for export through cross-border e-commerce and were suspected of infringing upon the exclusive right to use the trademark “Nestle.”