In follow up to the earlier release of the Top 10 Technical Intellectual Property (IP) Cases of 2020, the Supreme People’s Court of China has released the broader Top 10 Intellectual Property Cases in 2020 (2020年中国法院10大知识产权案件简介) on April 22, 2021.   This list, in addition to technical IP cases, includes non-technical IP cases such as a Red Bull trademark case; a Lego criminal copyright case; as well as the Xiaoi patent invalidation case, which later led to a $1.4 billion USD patent infringement suit against Apple.  However, of significant importance to foreign entities is #2 on the list – the Huawei-Conversant litigation, which yielded an extraterritorial injunction. That this case made by the general Top 10 List and the Top 10 Technical IP List indicates that these “anti-suit injunctions” prohibiting the enforcement of foreign court decisions on pain of significant daily fines in China are here to stay.  A Court-provided summary of the Huawei-Conversant case follows. 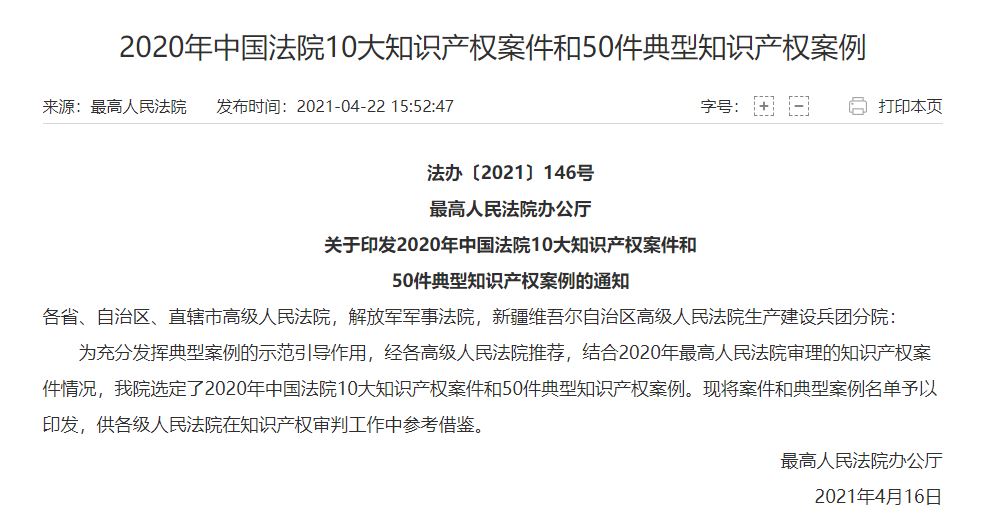 2. Wireless communication standard-essential patent “injunction” case:
Huawei Technologies Co., Ltd., Huawei Terminal Co., Ltd., Huawei Software Technology Co., Ltd. and Conversant Wireless Licensing Co., Ltd. confirmed non-infringement of patent rights and standard-essential patent licensing disputes (最高人民法院（2019）最高法知民终732、733、734号之一民事裁定书]
[Summary of the case] In January 2018, Huawei Technologies Co., Ltd., Huawei Terminal Co., Ltd., and Huawei Software Technology Co., Ltd. (hereinafter collectively referred to as Huawei) filed a lawsuit in this case with the Nanjing Intermediate People’s Court of Jiangsu Province, requesting confirmation that they did not infringe Conversant’s three Chinese patent rights and requested confirmation of the licensing rate of standard essential patents in China. In April 2018, in order to counteract Huawei’s lawsuit in this case, Conversant filed a patent infringement lawsuit in the court of Düsseldorf, Germany, requesting an order for Huawei to stop the infringement and compensate for the losses. On September 16, 2019, the court of first instance decided to determine the license fee rate for the standard essential patents involved for Huawei, its Chinese affiliates, and Conversant. Conversant refused to accept the judgment of the first instance and appealed to the Supreme People’s Court. During the second instance consideration of the Supreme People’s Court, on August 27, 2020, the German court made a first-instance verdict that Huawei and its German affiliates infringed Conversant’s European patents, and ordered Huawei and its German affiliates to cease infringement, destroy and recall infringing products, etc. The judgment can be temporarily enforced after Conversant provides a guarantee of 2.4 million euros. The judgment found that Conversant’s offer of standard essential patent license rates to Huawei did not violate the principle of fairness, reasonableness, and non-discrimination (FRAND). The standard-essential patent license rate of the multi-mode 2G/3G/4G mobile terminal products in the aforementioned offer of Conversant is approximately 18.3 times of the Chinese standard-essential patent license rate determined in the first-instance judgment. On the same day, Huawei filed an application for an injunction to the Supreme People’s Court, requesting that Conversant be prohibited from applying for enforcement of the German court’s judgment before the Supreme People’s Court makes its final judgment. The Supreme People’s Court issued an injunction on the basis of requiring Huawei to provide guarantees, that is, Conversant shall not apply for the execution of the above-mentioned German judgment before the final judgment of the Supreme People’s Court. In case of violation of this ruling, a daily fine of RMB 1 million shall be imposed from the date of violation, cumulatively on a daily basis. The ruling was served on the same day. Conversant filed a request for reconsideration during the reconsideration period. After the Supreme People’s Court organized a hearing for both parties, it ruled to reject Conversant’s request for reconsideration.
[Typical Significance] This case is the first injunction  ruling with the nature of an “anti-suit order” in an intellectual property lawsuit in China. It clarifies the necessity, degree of damage, adaptability, and suitability that should be considered when adopting injunctions that prohibit applications for enforcement of judgments of extraterritorial courts. Public interest and international comity factors, etc., and for the first time explored as well as the daily fines system, and initially established the judicial practice path of China’s “anti-suit injunction”. The ruling in this case led the parties to finally reach a global settlement agreement, ended parallel litigation in many countries around the world, and achieved good legal and social effects.

The full text of the summaries from the Supreme People’s Court is available here (Chinese only). An English translation of the case is available at Patentlyo here.