The Patent Trial and Appeal Board (PTAB) released statistics for AIA Patent Office trials as of Dec. 18, 2014.  Different commentators have recently reported that the institution rate for these proceedings has dropped to about 60-70 percent, depending on how you calculate it.  Those familiar with PTAB trial practice (IPR, CBM, PGR and derivation proceedings) understand that the trial statistics are moving targets, but they do provide some insight to interesting trends.

Based on the Dec. 18, 2014 data provided by the PTAB, it appears that the rate of denied petitions is approaching the rate of party settlements.  If the denial and settlement data are normalized to the number of filed trials (excluding the filings prior to decision on institution), the statistics show about a 20:20:60 percent relationship between settlements, denied proceedings, and instituted proceedings (ones that do not settle), respectively.  That means for every five petition filings, approximately one proceeding will be denied, one will settle early, and three will complete their trials.

But the filing of a petition is not always required to reach settlement between parties — the threat of a petition can provide all the impetus needed for settlement between parties.  This settlement effect of PTAB proceedings provides another opportunity for parties to attempt to settle their differences prior to the formal filing of an IPR, CBM, PGR or DER petition.  Frequently, the petition will be prepared to posture the matter for final discussion prior to its filing.  Once filed, the petition serves as valuable information for all other stakeholders interested in defeating the Patent Owner and its patent.  So a Patent Owner with some concern about the patentability of its patent has an incentive to settle with the prospective Petitioner before any petition is filed.

If you poll attorneys actively filing these petitions about the number of non-filed settlements they have accomplished compared to the number of petitions actually filed, you will get very different anecdotal responses.  Depending on that number, the impact on settlements of disputes in general (both formal proceedings and prior to formal proceedings) can be significant.

The following table shows how the settlement ratios change using different percentages of the number of matters that settle without any petition filing (percentage of non-filing settlements to that of post-filing settlements).  For example, if you estimate that for every 5 filed petitions, about 1 settlement occurs without a filed petition, refer to the 20% entry in the table below to find the aggregate percentage of disputes settled (including both pre-filing and post-filing disputes).  Using this 20% estimate, the aggregate percentage of disputes settled rises to roughly 33%, the percentage of denied cases drops to roughly 15%, and the percentage of matters going through full trial drops to roughly 48%.  This means for every six disputes, roughly two will settle (one with and one without a petition), one will be denied, and three will complete their trials.  Thus, by viewing disputes from a settlement perspective, including settlements obtained without filing a petition, the aggregate denial and institution rates necessarily fall and the efficacy of the challenges from an overall dispute perspective is enhanced, regardless of the win:loss ratio experienced by the parties at trial.

Of course, this is only a crude first approximation of settlement dynamics.  More information is needed to know the magnitude of the settlement effect of patent office trials on party settlements.  That information will be difficult to ascertain due to the confidential nature of such settlements, but each stakeholder can make its own approximation based on its experience.  Regardless, these settlements amplify the efficacy of the PTAB proceedings and their effect can be as significant as the known settlements arising from the PTAB proceedings themselves. 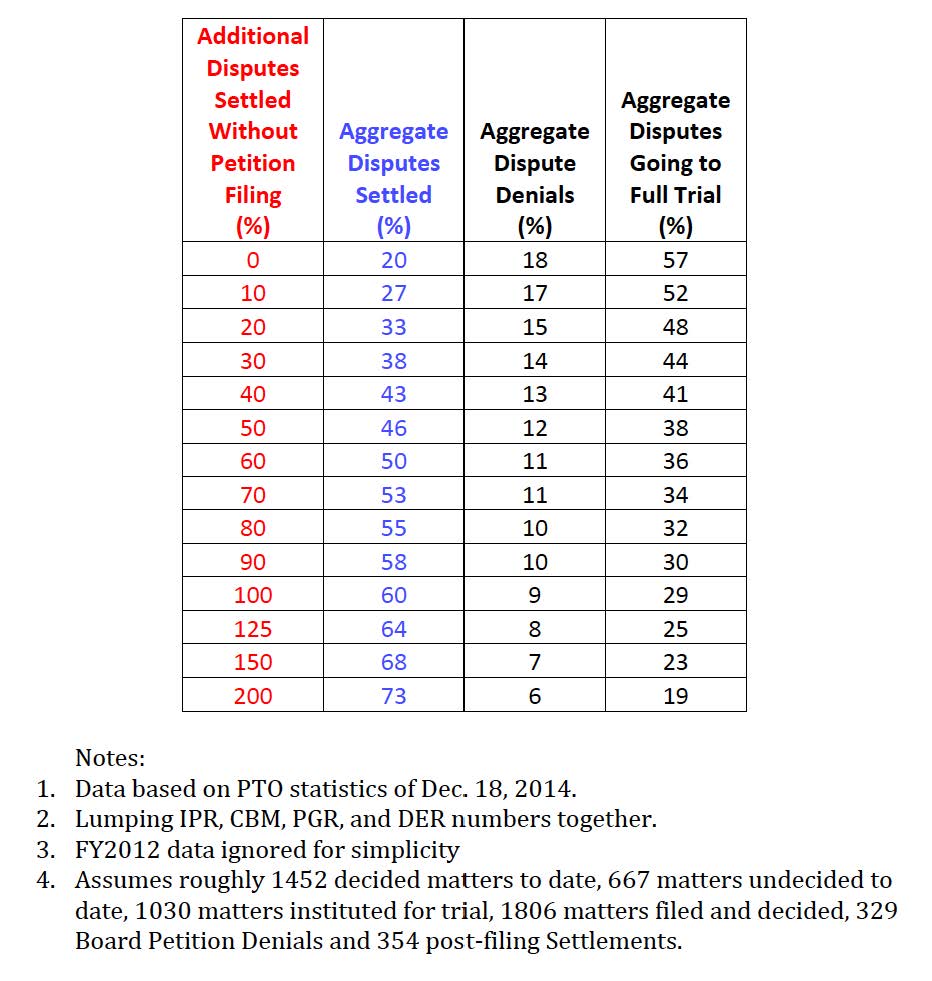