My thanks to Paul Cole of Lucas & Co. for the following post:

According to BBC News today, Apple have succeeded in the German courts in enforcing a patent for a user interface feature for their mobile devices. The ruling exemplifies the value of European patents for “software” inventions where a “technical” effect can be demonstrated. The claims in the granted patents and the problems that they solve provide useful insight as to what features of a user interface might be regarded as “technical” by the EPO. The advantages to a software developer of being able to patent innovative interface features of this type are self-evident.

The affirmed patent is EP-B-1964022 which relates to the “slide to unlock” feature found in iPhones.  The claim as granted is set out below: 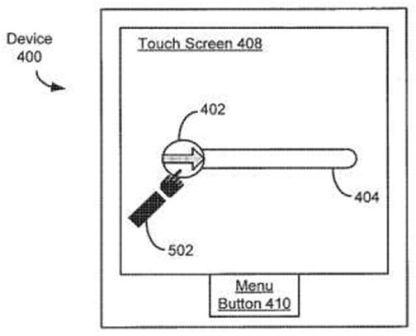 detecting contact with the touch-sensitive display while the device is in a user-interface lock state;

transitioning the device to a user-interface unlock state if the detected contact corresponds to a predefined gesture; and

maintaining the device in the user-interface lock state if the detected contact does not correspond to the predefined gesture; characterized by

moving an unlock image along a predefined displayed path on the touch-sensitive display in accordance with the contact, wherein the unlock image is a graphical, interactive user-interface object with which a user interacts in order to unlock the device.

A copy of the decision is not yet available online, but study of the online file of the patent application (which was not opposed after grant) is instructive. The Examining Division accepted that the provision of a device control method with visual feedback was a technical problem but objected that the claimed subject matter was obvious because dragging and dropping were known.  In their reply, Apple argued that the objective technical problem was to provide a more efficient user-friendly procedure for unlocking a portable device and to provide a sensory feedback to the user regarding progress towards satisfaction of a user input condition that was required for unlocking to occur. As set out in the claim, the unlock image signalled to the user that the device was locked and simultaneously indicated a contact point that a user had to touch in order to unlock the device. The displayed path indicated to the user where and how the unlock image had to be moved and the current position of the image indicated progress already made towards the unlocked condition. The method was easier than in the prior art where a sequence of operations had to be memorised.

The second patent, EP-B-2059868 which relates to the handling of digital images, has not yet been ruled on by the German courts. However, the granted claim and the reasons for grant are also of interest especially since any iPhone user will be familiar with the “Camera-Roll” feature in question. The main claim is set out below.

A computer-implemented method, comprising:  at a device (100) with a touch screen display:

detecting a first movement of a physical object on or near the touch screen display;

in response to display of a previously hidden edge of the first digital object and continued detection of the first movement,

displaying an area  beyond the edge of the first digital object;

detecting a second movement of the physical object on or near the touch screen display; and

It appears from the file of the granted patent (which again was not opposed) that the technical effect of allowing a user to navigate within an image and to switch between images with a minimum of user input types was sufficient to support patentability. The EPO acted as International Searching Authority, International Preliminary Examination was not necessary since the written opinion accompanying the search was favourable to patentability, and no objections were raised on entry into the European regional phase. For applications where allowable subject matter is likely to be identified, the advantages to US applicants of using the EPO as ISA (and possibly subsequently IPEA) are also self-evident.