On December 21, 2020, the Beijing Intellectual Property Court announced that on December 18, 2020, the  Court ruled in several administrative trademark cases that the trademark registrants forged evidence to prove use in trademark cancellation proceedings. The registrants had provided fake tax invoices to prove use via the sales.  However, the tax invoices didn’t match queries with the National Value-Added Tax Invoice Inspection Platform of the State Administration of Taxation. Accordingly, the Court reversed the earlier rulings based on the forged evidence and fined the registrants. 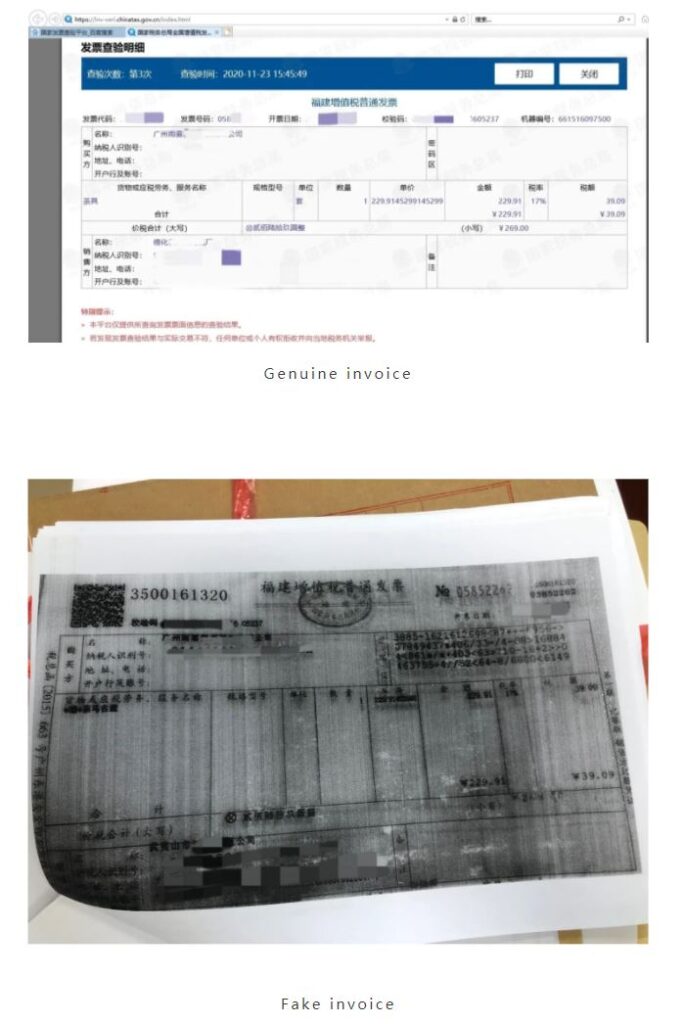 There was a total of eight administrative litigations.

The Beijing Intellectual Property Court found that the invoice evidence submitted during the administrative proceedings were inconsistent with the query results of the National Value-Added Tax Invoice Inspection Platform of the State Administration of Taxation. Specifically, the product name, product brand, seller and taxpayer identification number in the online query do not match the evidence submitted, indicating it was forged.

The Beijing Intellectual Property Court ordered Jilin Green Forest Company, Tianjin Zhongying Company, and Mao to submit the original evidence and explain. None of the above entities gave a reasonable explanation for the “inaccuracy.”

Accordingly, the Beijing Intellectual Property Court determined that the above-mentioned evidence was forged and the registrants could not prove the use of the trademark involved in the case. Therefore, the Court revoked the decision made by the CNIPA to maintain the trademarks.  The Beijing Intellectual Property Court fined Jilin Green Forest Company and Tianjin Zhongying  10,000 RMB (~$1,500 USD) each and fined Mao a total of 30,000 RMB.

In administrative litigation for reexamination of trademark rights, whether trademark rights should be revoked due to non-use for three consecutive years, commercial documents such as invoices issued by tax authorities are the key basis for proving the actual use of trademarks in such cases. The parties that commit fraud in these cases reflects the lack of integrity and indifference to rules, and violates the integrity of the trademark registration and use system. The Beijing Intellectual Property Court has intensified its review of evidence in such cases, and strictly dealt with fraud in accordance with the law, creating an honest trademark registration and use system, and maintained legal dignity and judicial authority.

While this case represents a positive development in the integrity of the trademark system, it would be preferable for CNIPA to verify tax invoice evidence going forward instead of requiring litigants to sue CNIPA for failing to perform a relatively simple query, especially as it is unlikely that such a small fine alone would discourage future forgery.