According to a joint decision of the China National Intellectual Property Administration (CNIPA) and the Austrian Patent Office, the China-Austria Patent Prosecution Highway (PPH) pilot project will be extended for another five years from March 1, 2021, until February 28, 2026.  The PPH enables accelerated examination of Chinese patent applications based on an allowance of an earlier-examined patent application.  The relevant requirements and procedures for submitting PPH requests in the two offices remain unchanged.  The China-Austria (regional) PPH pilot program was launched on March 1, 2013, and was extended three times in 2014, 2016 and 2018. 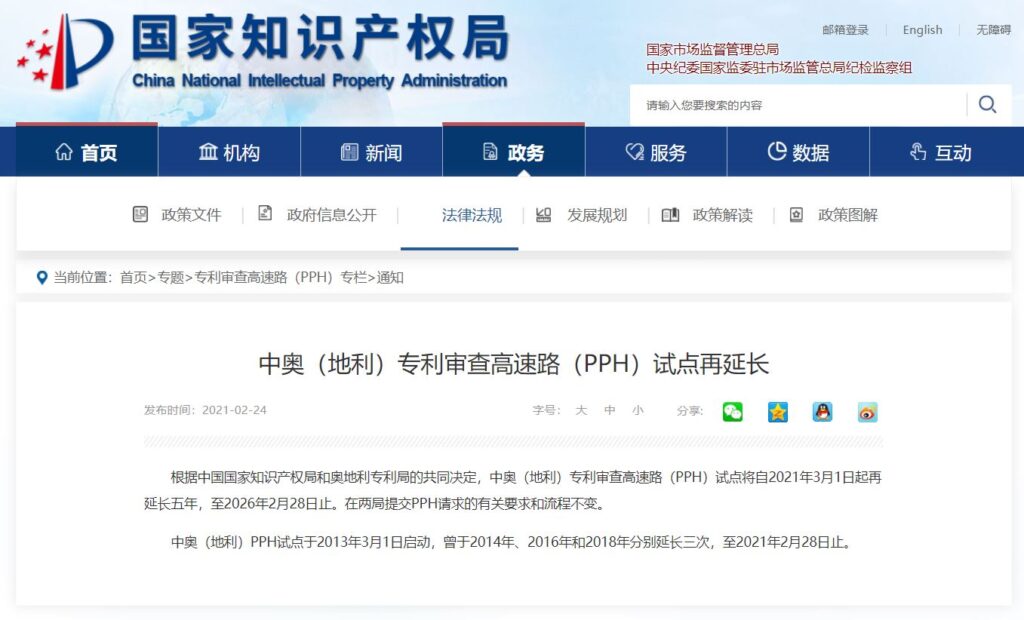 This follows on the January 20, 2021 extension of the Sino-German Patent Prosecution Highway (PPH) pilot project. According to a joint decision of the CNIPA and the German Patent and Trademark Office, the Sino-German PPH pilot project was extended for another three years from January 23, 2021, until January 22, 2024. The relevant requirements and procedures for submitting PPH requests in the two offices remain unchanged. The Sino-German PPH pilot program was launched on January 23, 2012 and was extended three times in 2014, 2016 and 2018.

In order to file a request to participate in PPH in China, an applicant must file the request after publication of the Chinese invention application but before receiving an Office Action. Further, the PPH request should be filed when filing a request for exam, or after the Chinese application has entered into substantive examination (i.e., received a notice of entering substantive examination).

In addition to a request to participate in the PPH, an applicant must submit (1) Chinese translations of the allowable claims of the relevant base application, (2) list of references cited by the examiner, (3) copies of nonpatent literature references cited by the examiner, if any (4) a claims correspondence table with explanation; and (5) copies of all office actions that are relevant to substantive examination for patentability. The applicant also should submit Chinese translations of all office actions if the documents are not in English.

PPH applications get examined significantly faster than conventional applications in China. One can expect a first Chinese office action within about 2.4 months of filing of a PPH request and 11.1 months to final disposal according to statistics.