The Supreme People’s Court of the People’s Republic of China released the “Opinions on Increasing the Punishment of Intellectual Property Infringement Acts According to Law” (关于依法加大知识产权侵权行为惩治力度的意见)  on September 15, 2020. The opinions confirm the primacy of injunctions and potentially increases the amount of monetary damages typically awarded.  The opinions also cover strengthening evidence preservation and increasing criminal enforcement of the intellectual property laws.  Notably, the opinions amend Article 20 (now Article 15) from the draft opinions by removing a foreigner-targeted clause, “for infringement of trade secrets by overseas institutions, organizations, and personnel, severe penalties shall be imposed in accordance with the law.” 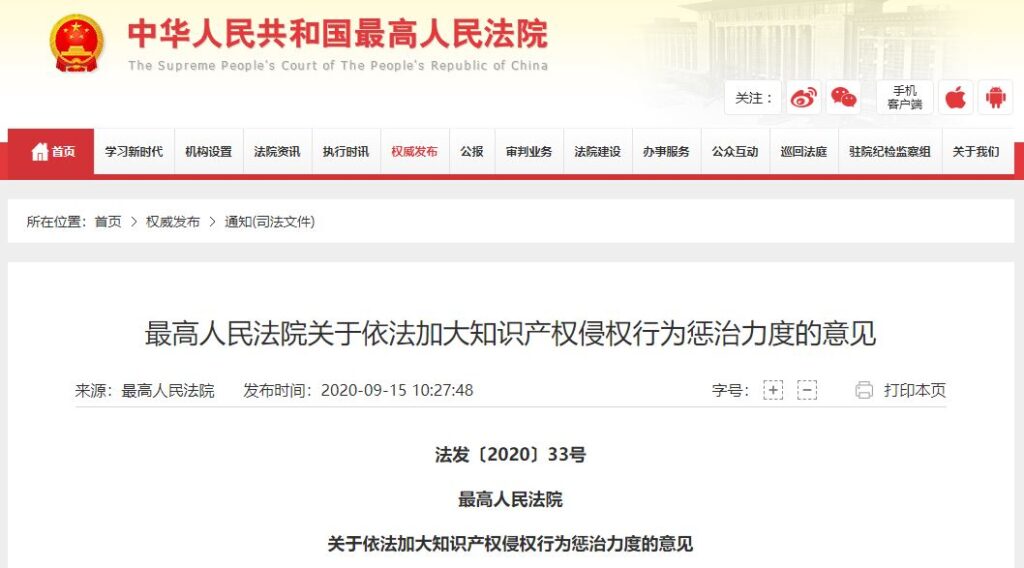 Article 6 states the the People’s Courts should support rights holders’ requests to destroy counterfeit or pirated products as well as the manufacturing equipment used to manufacture the products.

Further, if statutory damages are to be awarded, Article 11 states, “if the infringer deliberately infringes and the circumstances are serious, the amount of statutory compensation shall be determined by approaching or reaching the maximum limit.” The maximum statutory damages in the draft amended patent law will be 5 million RMB or about $714,100 USD (increased from 1 million RMB).

Article 11 sets forth the factors for determining the amount of statutory compensation (when damages can’t be calculated) including if the infringement is intention; if the defendant’s main business is infringement; the length of the ongoing infringements; repeated infringement; infringement involving a wide  area, and endangering personal safety, environmental resources or damage the public interest.

Article 9 states if the “People’s Court orders the accused infringer to provide evidence of profits from infringement and if it refuses to provide it without proper reason, the People’s Court may determine the amount of financial damages based on the claim of the intellectual property right holder and the evidence in the case.”

The opinions state that severe penalties should be imposed for counterfeiting of goods for emergency rescue, disaster relief, and epidemic prevention.

The full text (Chinese only) is available here.