China’s Supreme People’s Court released Provisions on Evidence in Intellectual Property Civil Litigation (最高人民法院关于知识产权民事诉讼证据的若干规定) on November 16, 2020 and goes into effect November 18, 2020. Some of the highlights include potential burden shifting in methods of manufacture claims, evidence needed to file a declaratory judgment action for non-infringement, admission of foreign-originated evidence, evidence preservation, and court-appointed experts. 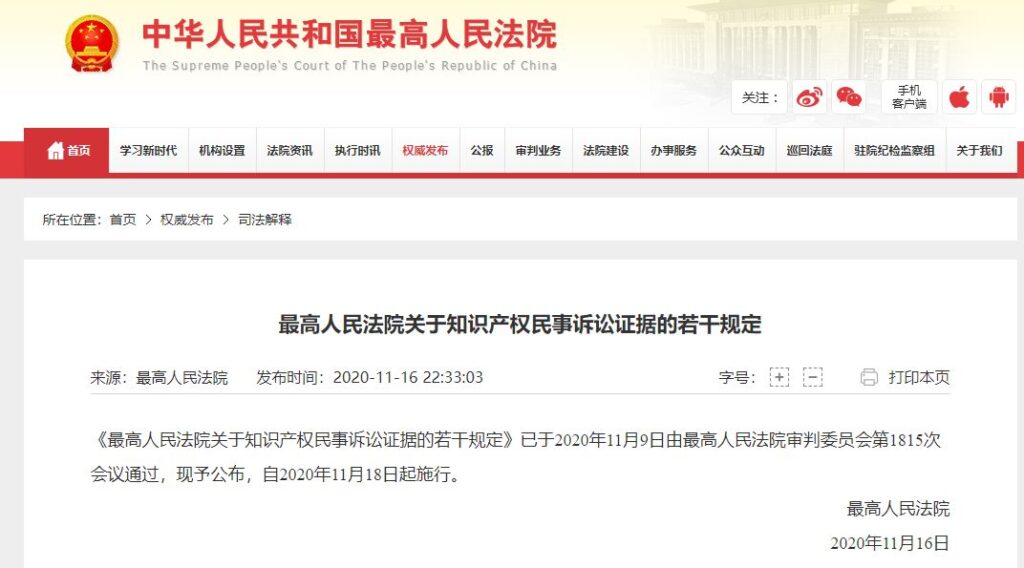 Method of manufacturing should preferably be used when drafting Chinese patent applications as they allow for potential burden shifting from plaintiff to defendant.  This is particularly useful as there is minimal discovery in China compared to the U.S.

Where a product manufactured by a patented method is not a new product, the plaintiff in a patent infringement dispute shall provide evidence to prove the following facts:

(3) The plaintiff made reasonable efforts to prove that the defendant used the patented method.

After the plaintiff has completed the evidence presented in the preceding paragraph, the people’s court may require the defendant to provide evidence to prove that its product manufacturing method is different from the patented method.

Per Article 5, the plaintiff in a declaratory judgement action should provide the following evidence of being put on notice before filing, reminded defendant re notice, and the defendant did not file a lawsuit within a reasonable time.

Foreign-originated evidence should be easier to enter under the provisions.  Article 8 reads:

The following evidence formed outside the territory of the People’s Republic of China, where the parties raise an objection only on the grounds that the evidence has not gone through the certification procedures such as notarization and certification, the people’s court shall not support the objection:

(1) It has been confirmed by a legally effective people’s court;

(2) It has been confirmed by the effective award of an arbitration institution;

(3) Public publications, patent documents, etc. that can be obtained from official or public channels;

(4) There is other evidence to prove the authenticity.

Per Article 10, a People’s Court will not accept an objection to non-certification for foreign-originated evidence if

(1) The party who raised the objection clearly recognizes the authenticity of the evidence;

(2) The opposing party provides witness testimony to confirm the authenticity of the evidence, and the witness clearly indicates that he is willing to accept punishment if he commits perjury.

The people’s court shall review the application for evidence preservation by the parties or interested parties in combination with the following factors:

(1) Whether the applicant has provided preliminary evidence for its claim;

(2) Whether the evidence can be collected by the applicant;

(3) The possibility that the evidence will be lost or will be difficult to obtain in the future and its impact on the facts to be proved;

(4) The impact of possible preservation measures on evidence holders.

People’s Courts are allowed to appoint experts per Article 19 to verify the following:

(2) The similarities and differences between the alleged infringing work and the work claiming rights;

(4) The similarities and differences between the accused infringing object and the authorized variety in terms of characteristics, and whether the difference is caused by non-genetic variation;

(6) Whether there are defects in the technology involved in the contract;

(7) The authenticity and completeness of electronic data;

The full text is available here.