In case no（2021）最高法知行终322号 recently highlighted by China’s Supreme People’s Court on November 2, 2021, the Court ruled that an unintentional short payment of a patent annuity caused termination of the patent.  A patentee received a “Patent Termination Notice” issued by the China National Intellectual Property Administration (CNIPA) and sued CNIPA at the Beijing Intellectual Property Court, claiming that it had paid the annuity of 600 RMB, and the CNIPA nonetheless terminated its patent right. However, the 600 RMB was insufficient to cover the annuity and late fee due. 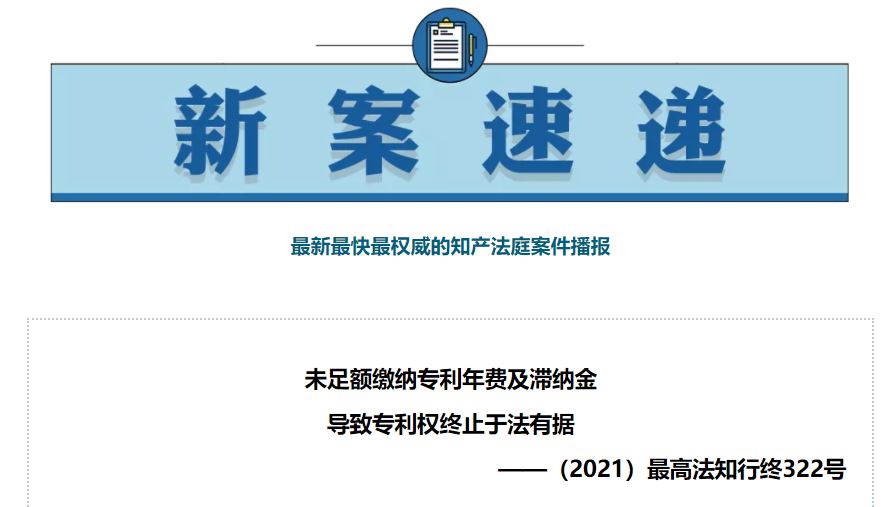 The court of first instance found that the patentee had paid the annuity for the first eight years of the patent in full normally, but the company only paid 600 RMB for the patent annuity in 2019 but did not pay the late fee at the same time. According to the Implementation Rules of the Patent Law, the amount paid by the patentee was insufficient to cover the annuity and late payment fees for the year. Therefore, CNIPA’s determination that the patent in question should be terminated complies with the law.  Accordingly, the court of first instance ruled to reject the company’s request.

The patentee appealed the decision to the Supreme People’s Court. The patentee believes that the fact that it failed to pay the patent annuity in full was caused by the failure to receive the payment notice and an error in the information received through telephone consultation.

The Supreme People’s Court held that the second paragraph of Article 4 of the Implementing Regulations of the Patent Law stipulates that if the parties entrust a patent agency, the documents shall be sent to the patent agency. Article 119, paragraph 2, requires that if bibliographic  data changes, the patentee must notify CNIPA accordingly. In this case, although a patentee claimed that it had terminated its agency relationship with the entrusted patent agency since 2015, it did not go through the procedures for changing the bibliographic data in accordance with the regulations. The CNIPA served the patent agency in accordance with relevant regulations and the payment notice complies with the law. The company failed to receive the payment notice because it failed to go through the procedures for changing the bibliographic data. This is due to its own fault and does not affect CNIPA’s application of the relevant regulations. According to Article 44, Paragraph 1, Item 1 of the Patent Law, if the annual fee is not paid in accordance with the regulations, the patent right shall be terminated.  If the patentee has not paid or has not paid in full, CNIPA shall notify the patentee to make up the payment within 6 months from the expiration of the due date of the annuity fee, and pay a late fee at the same time. If the payment is not made within the time limit, the patent right shall be terminated.

It can be seen that paying the annuity in full is a legal obligation of the patentee, and the patentee should be aware that it is not related to whether there is an unintentional short pay. For the “not paid at the expiration date” in the above provisions, it means that the patentee before the statement did not pay the annuity and late payment on time.  Therefore, the reasons for the termination of the patent right is due to the failure to pay at the expiration date including the unpaid annuity and late fees that leads to the legal consequences of the early termination of the patent right. Based on this, the Supreme People’s Court rejected the appeal and upheld the original judgment.