On April 27, 2021, the General Administration of Customs, China, released the Typical Cases of Intellectual Property Enforcement by Chinese Customs (中国海关知识产权保护典型案例). Registration of intellectual property (IP) rights with Customs enables Customs to block both the import and export of infringing products. The 10 typical cases were for mainly for the export from China of counterfeit or infringing products including clothing, headphones, medicine, personal care products, chemicals and more.

The following are the 10 cases as described by Customs, edited for length and clarity.  The original text may be found here (Chinese only). 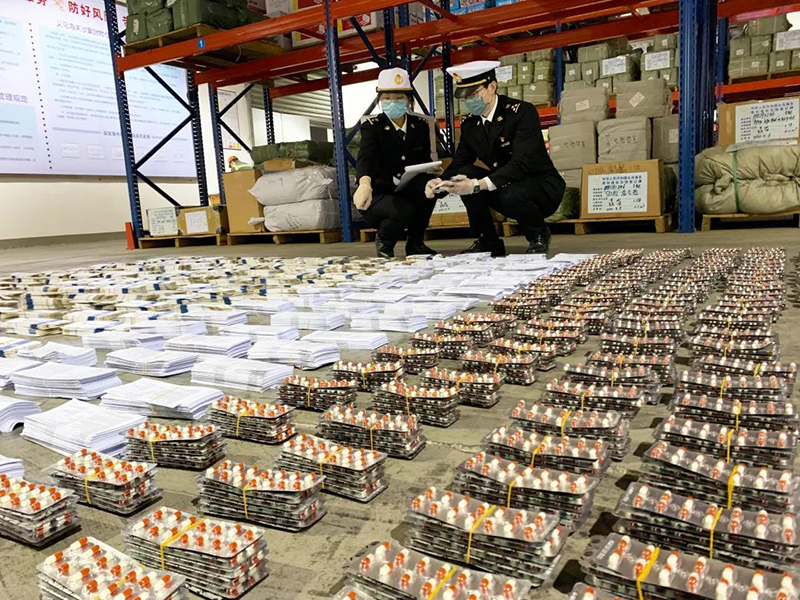 On July 7, 2020, an import and export company in Yiwu declared to Hangzhou Customs to export a batch of small commodities such as pillow cores and paper boxes to Iraq. After preliminary inspection by customs officers, it was found that there the contents were actually drug packaging boxes and instructions with the “Pfizer” logo in the container. The inspectors suspected the exporters of hiding the actual drug capsules  separately from the packaging, which were found at the bottom and back end of the container. After thorough investigation and inventory, a total of 690,200 pharmaceutical capsules, 96,000 pharmaceutical packaging boxes, and 71,400 pharmaceutical inserts with the “Pfizer” logo were seized. The trademark owner Pfizer Products Co., Ltd. confirmed that the batch of drug capsules, packaging boxes, and instructions are all infringing products. 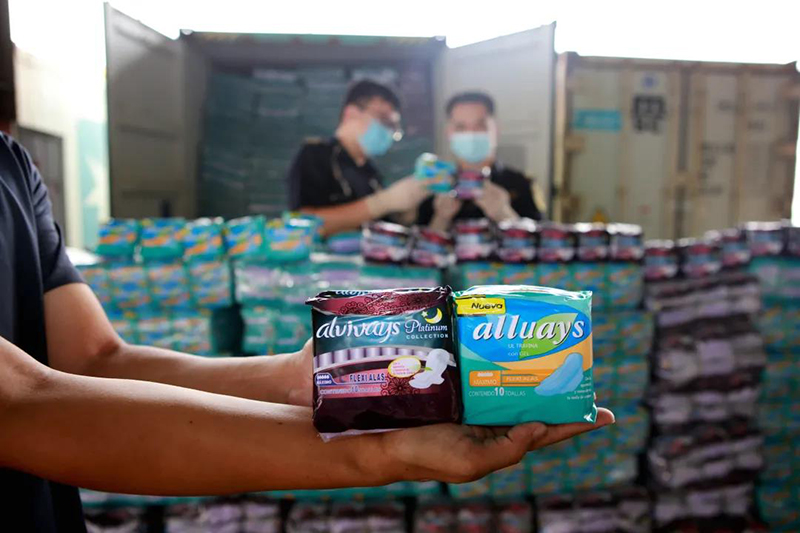 On August 26, 2020, Xiamen Customs found that a certain cargo container  declared by a Qingdao Import and Export Co., Ltd. for export to South America was suspected of infringement through the comparison and analysis of manifest route data and customs declaration data. After inspection, it was found that the goods in the container were 1.51 million packages of sanitary napkins. The outer packaging of the goods was pritned with  “alluays” and “alvivays”. The above-mentioned English letters matched Procter & Gamble’s product packaging in terms of font, size ratio, layout, and artistic modeling. The trademark “always” registered with the General Administration of Customs is very similar in terms of overall visual effects. The investigation confirmed that the above-mentioned goods were infringing. In the following two months, the customs successively seized 7 batches of 4.81 million packages of sanitary napkins, diapers and other sanitary products suspected of infringement, valued at 6 million RMB. 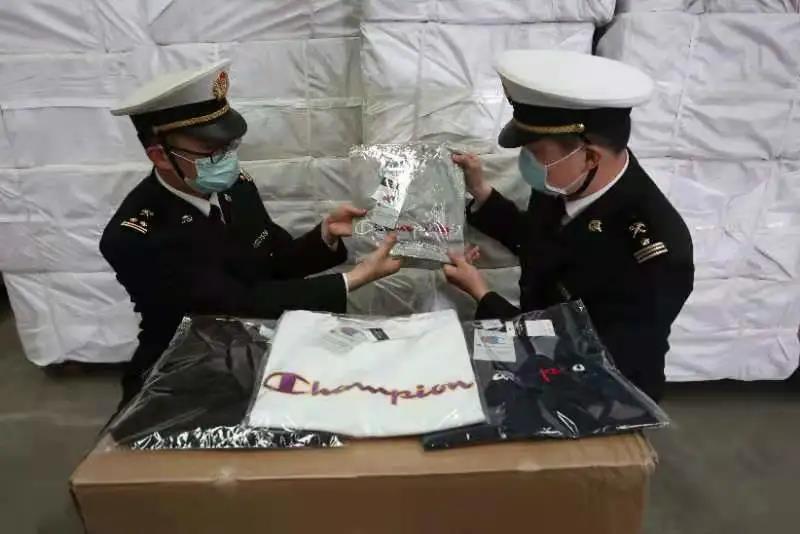 In April 2020, Qingdao Customs inspected an import by a science and technology company in Fujian, and found that the use of the “Champion” logo on sweatshirts is suspected to be infringing. This was later confirmed with a total of 9,118 shirts having a value of 319,100 RMB. Due to the large amount of money involved in the case and the suspected crime, Qingdao Customs immediately notified the public security organs of the evidence of the case, and requested the public security organs to intervene. Based on this, the public security organs uncovered a series of extremely large sales of counterfeit registered trademark goods by the technology company,  destroyed 5 counterfeit sales dens, and arrested more than 20 criminal suspects. More than 300,000 pieces of counterfeit internationally renowned brand clothing, including “Champion,” worth nearly 200 million RMB were seized. 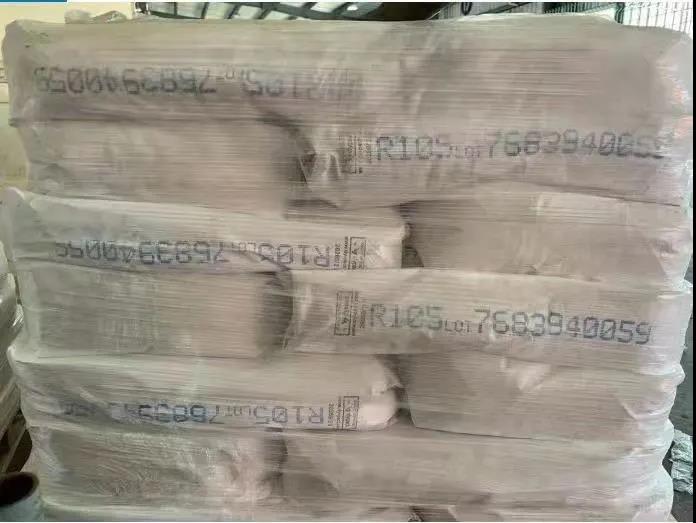 In October 2019, Shanghai Customs learned  that a batch of titanium dioxide that infringed on the trademark rights of “Chemours” was about to be exported from Shanghai port. Shanghai Customs quickly responded  in accordance with intelligence, quickly carried out investigation and verification, and seized the suspect target container in one fell swoop. After on-site inspection, f 5 tons of titanium dioxide declared for export by a trading company in Shenzhen was marked with “CHEMOURS and graphics” on the outer packaging of the product. The right holder confirmed that this batch of exported titanium dioxide was an infringing product and applied for customs protection of intellectual property rights. Shanghai Customs quickly filed a case and detained the suspected infringing goods. Through the investigation of the case, Shanghai Customs gradually collected evidence that the above-mentioned exported goods infringed on trademark rights, as well as the illegal production, transportation, and export sales of the above-mentioned export goods. In November 2019, Shanghai Customs cooperated with the public security organs to arrest 8 suspects who produced and sold counterfeit registered trademark goods, and verified the illegal sales amount of more than 3.3 million RMB, successfully destroying a cross-border trade operated by a criminal network that manufactures and sells infringing titanium dioxide. On July 6, 2020, the Shanghai Third Intermediate People’s Court announced that the principal culprit Shi XXX was sentenced to four years and six months in prison with a fine, and Li YYY was sentenced to three years in prison with a suspended sentence of four years and a fine, and five accomplices were fined, as well as Shijiazhuang  company fined. 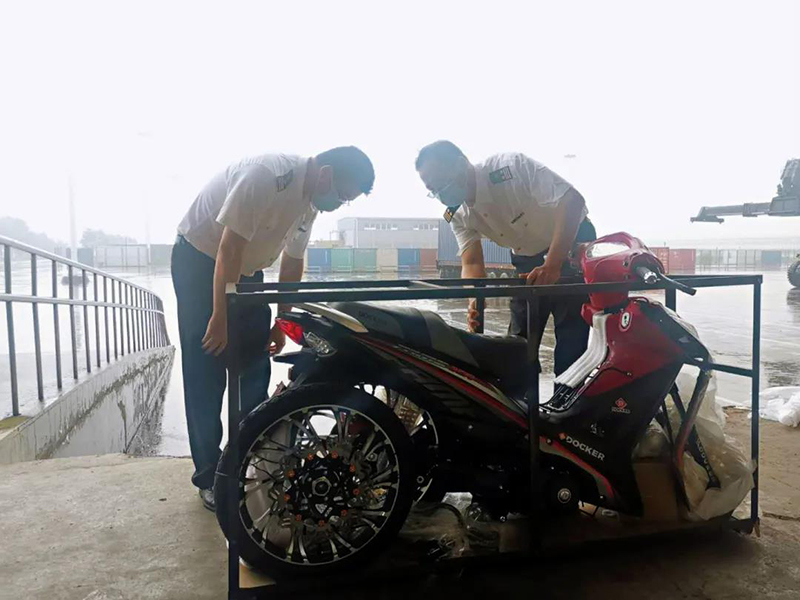 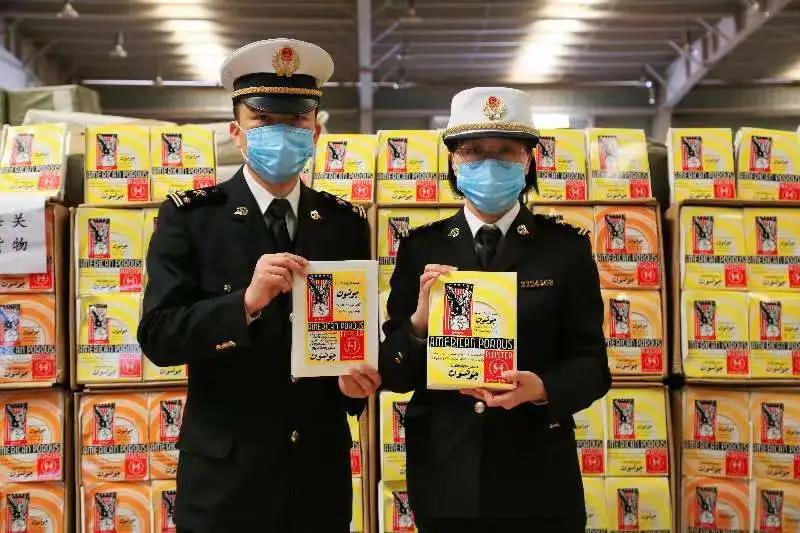 In mid-October 2020, Ningbo Customs received clues about infringement, and that a batch of adhesive bandages that infringed Johnson & Johnson’s trademark rights will be exported from Ningbo port. After learning that the trademark has been registered in China but has not yet been filed with the customs, Ningbo Customs actively explained customs protection of intellectual property rights to Johnson & Johnson, guiding the company to register intellectual property rights with the General Administration of Customs in a timely manner, laying a foundation for the initiation of active protection procedures. Ningbo Customs Intellectual Property Department, Risk Management Department, Inspection and other departments have strengthened their linkages, grasped the new situation and new trends of infringing goods in real time, and issued scheduled deployment control instructions to seize relevant containers. On November 5, Ningbo Customs found that most of the goods in the box were rubber bands and tapes packed in cartons when unpacking and inspecting a batch of goods declared by a company in Yiwu for export to Yemen. There was no obvious abnormality in appearance, but according to the previous intelligence risk analysis and comparison, the on-site inspection officer believed that there is a risk of infringement of the listed cargo. After a thorough inspection of the container, 129,456 cases of adhesive bandages that infringed on the trademark of “Johnson & Johnson (graphics)” were found hidden on the bottom of the container. 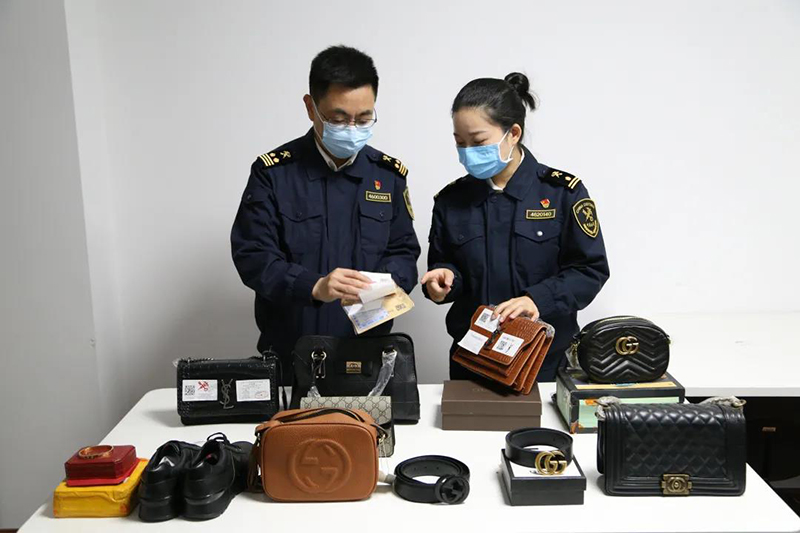 Nanjing, Zhengzhou, Hefei, and Nanchang Customs focused their cooperation on combating the drift of infringing goods through postal channels, and strengthened intelligence sharing to implement precision strikes. In the second quarter of 2020, Nanjing Customs found that its mail delivery channels also experienced a sharp decline in export parcels and infringing goods. Based on risk analysis of relevant information such as the sender and sender, it was suspected that there was “port drift” of infringing goods. Nanjing customs promptly notified the customs of Zhengzhou, Hefei and Nanchang of relevant information. 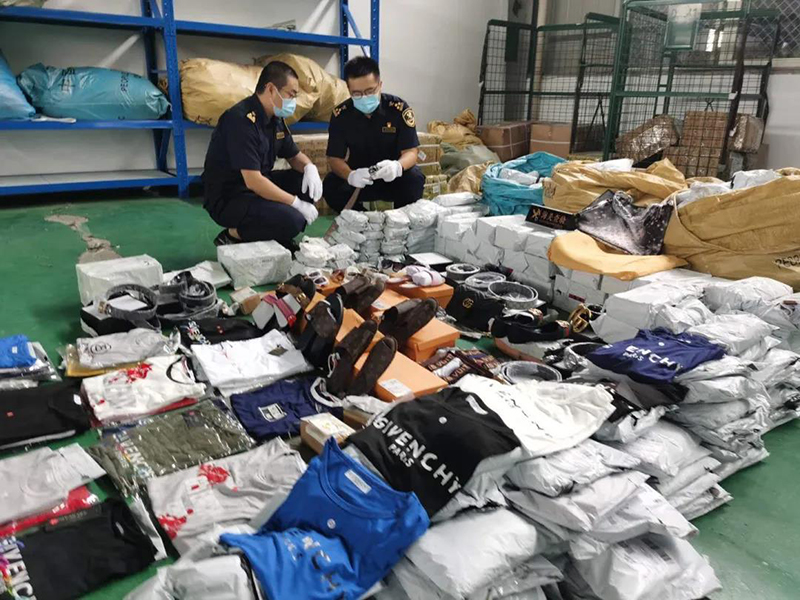 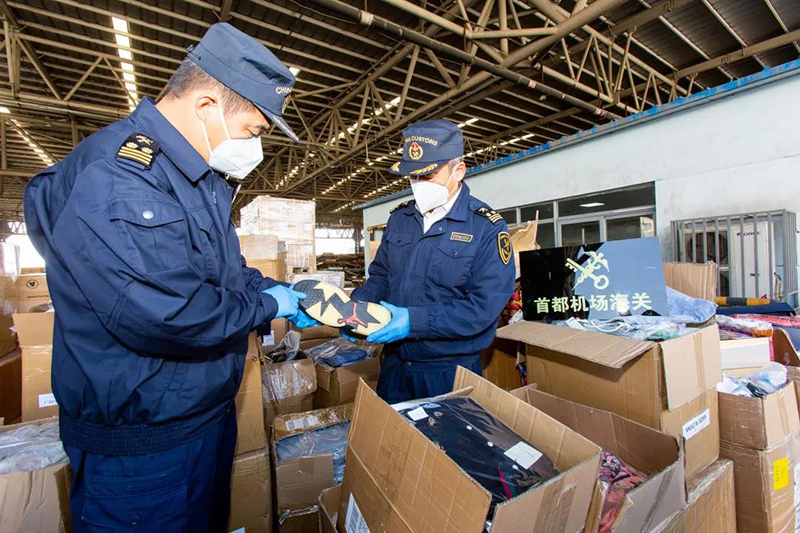 On September 30, 2020 Beijing Customs received a customs declaration form for nine items of exported goods declared by a company in Linyi City through special release instructions, including Women’s Jackets, etc. Upon opening the container, it was found that the actual goods were glasses with the “GUCCI” and “Ray·Ban” logos, leather bags with the “LV” and “CHANEL” logo, sneakers with the “PRADA” “Air Jordan” logo and other logos, totaling more than 60,000 pieces, involving 18 trademark rights of more than ten right holders. Upon confirmation by the right holders, all of them were confirmed as infringing commodities. On the basis of this case, Beijing Customs further conducted in-depth analysis of customs clearance data and historical case data, extensively collected evidence etc., and seized a total of 547 batches and nearly 70,000 infringing goods in 2020, with a value of more than 1.5 million RMB. 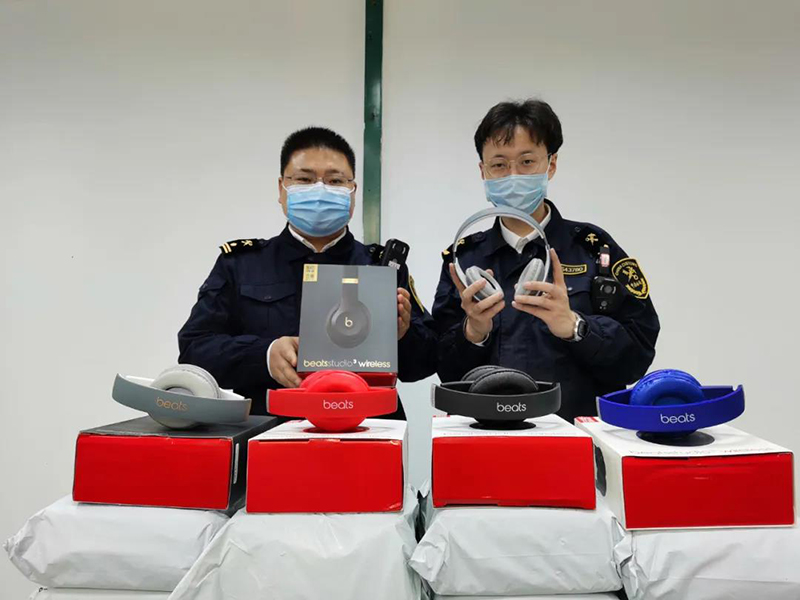 During the same period, the Fuzhou Customs intensified risk analysis, precise deployment and control, and increased inspection efforts in response to the substantial increase in the number of goods shipped to the United States through postal channels in the customs area. A total of 1,379 batches of various infringing goods mailed to the United States were seized, and 1,612 infringing items such as earphones, sunglasses, bracelets, watches, backpacks, and vacuum flasks were detained, valued at 146,000 RMB. The above-mentioned infringing goods used multiple marks such as “Beats”, “BOSE”, “Cartier”, “ROLEX”, “LV”, and “GUCCI”, which violated the trademark rights of the relevant right holders. 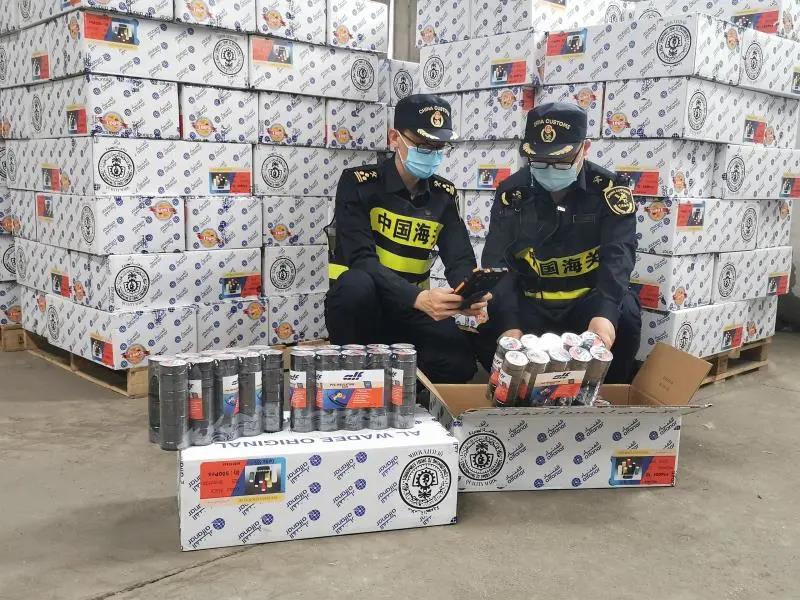 On May 1, 2020, Tianjin Customs successfully seized 575,000 infringing tapes declared by a company in Dongguan for export to Iraq. The aforesaid tapes were confirmed by the right holder as having infringed upon the “alf” trademark right registered with the General Administration of Customs.

Lanzhou Customs guided Lanzhou Foci Pharmaceutical Co., Ltd.,  in completing the trademark registration recordation formalities at the General Administration of Customs after learning that the enterprise’s “Ci” trademark was being infringed in overseas markets and hurting its sales volume.  Foci is “China Time-honored Brand” enterprise with a pharmaceutical history of 89 years.  Lanzhou Customs conducted cross-customs area law enforcement cooperation with the customs offices of Shanghai, Tianjin, Nanjing and Shenzhen to jointly intercept the infringing goods. On October 28, 2020, Shanghai Customs successfully intercepted 7,344 bottles of Chinese traditional medicine which infringed the trademark for “Ci”.

10 The Guangzhou, Shenzhen, and Huangpu Customs cracked down on export transshipment infringing goods 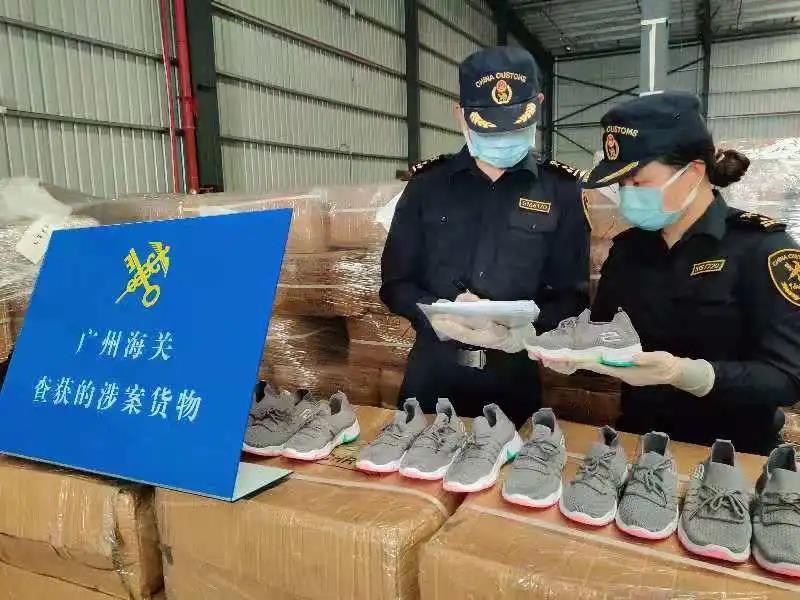 In 2020, the General Administration of Customs (GAC) deployed some Customs officers to carry out a special enforcement action on intellectual property protection for export transshipment goods (code-named “Net Operation”), focusing on combating infringing goods transported to Hong Kong through sea, land and post express mail channels or transshipped to countries and regions along the Belt and Road through Hong Kong, Europe, South America, and Africa . At the same time, the GAC has stepped up inspection of travel channels, focusing on drugs, food, biological products, clothing, watches, shoes and boots, consumer electronic products, leather bags, personal care supplies, glasses, computers and accessories and toys. During the special campaign, the Guangzhou Customs focused on the use of international transshipment cargo by small vessels coming from and going to Hong Kong and Macao. In October 2020, Customs found that a  certain container of footwear that was about to be exported to South America by international transit was highly likely to contain infringing goods. Customs officers then seized the container. Upon inspection, it was found that the container contained a large number of suspected infringing shoes and sneakers, involving a total of 24,272 pairs of well known sports brands such as “SKECHERS”, with a value of 419,000 RMB. All the goods were confirmed by the trademark owner as infringing commodities. Shenzhen Customs and Huangpu Customs then seized 66 batches and 361,000 infringing cross-border  goods, with a value of 9.544 million RMB.

In March 2020, Shenzhen Customs discovered that a batch of cross-border  goods that an e-commerce company in Hunan declared for export  was about to be transported by road to Hong Kong and then transferred to Singapore and having a great risk of infringement. After key inspections, 42083 pieces of infringing goods such as glasses and watches were found in the declared goods, involving 8 trademark rights such as “Ray Ban” and “PORSCHE DESIGN”, which have been confirmed by the right holder. All of the seized good were infringing with a value of more than 1.953 million RMB.

In August 2020, when the customs officers of Fenggang Customs under Huangpu District conducted manual inspection on a batch of goods declared by a Dongguan e-commerce Co., Ltd., with declared goods as “earphones” but with a declared specification type of “without specification” on-site inspection officers went on alert. It was found upon opening of the container that the listed were headphones bearing the logo of “SAMSUNG”, and the goods were rough, poorly packed and suspected of infringement. Upon further verification, 37,022 sets of allegedly infringing headphones were found, involving three brands of “SAMSUNG”, “Apple”, and “JBL”, all of which were confirmed by the owner as infringing commodities.