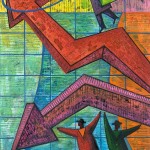 I have been a patent attorney since 1981 and have always been interested in software as a hobby, as an investor, as an entreprenuer, and most predominantly as an intellectual property attorney who has helped countless software companies establish the intellectual property procedures and protections they needed in order to try to build a viable enterprise.   Along the way, I have recommended many different strategies to my clients running the gamut from giving away their code, making their code open source but subject to license restrictions, keeping their source code trade secret and licensing only object code under a restrictive license, and including sometimes a recommendation to make patent protection a core protection strategy.  The approach a company takes will depend greatly on the demands of the industry they seek to compete in and the amount of risk the company must take to establish an ongoing concern.

Unfortunately, I have seen many of these start-up software companies go under — many after years of a hard fight to get traction.  Not a single one ever died because they were sued for patent infringement or even because there was a danger of patent infringement or being sued.  No, the real problem facing software companies, contrary to notions promoted by certain anti-patent organizations, is not the risk of infringing a patent but rather the risk of not being able to find any customers who want to buy, or sometimes even use, their software.  As Bob Dylan sings in the song Workingman Blues, “Sometimes no one wants what we got, Sometimes you can’t give it away.”  As Bob knows from experience, the first thing an author worries about is just getting someone to want their stuff, and if that ain’t happening, they won’t be worried too much about getting sued for infringement.  The reality is that most of new innovation just can’t find profitable traction in the marketplace — not even enough “profit” to keep one programmer going.  In other words, its the lack of sales that kills innovative new products, not software patents.

Unless my experience with many dozens of start-up software companies is a statistical abberation, the reality of the impact of software patents on the vast majority of small to mid-sized companies is 180 degrees opposite the scenario constantly regurgitated by software patent opponents.  In other words, the real (as opposed to hypothetical) threat of software patents to independent developers, start-ups and small software shops is either nil or near nil, for many reasons.  Even mid-sized software c0mpanies are rarely “threatened”, in the sense they are at risk of going out of business, by software patents.  And, while I am not entirely sure about this, it doesn’t seem like the “free software” movement is that concerned that giant software companies that thrive on proprietary software schemes are even worthy of sympathy if they get sued for software patent infringement.

So, why is all this energy poured into fighting software patents when in fact they have little or no negative impact on the only developers the “free software” movement cares about — companies that aren’t making any money anyways because they give everything away, or even small to mid-sized for-profit programmers?  It really not clear to me, but seems to be more about software developer culture and myth than actual business experience or logic.

In my experience, it would be much more useful for the anti-software patent forces to spend their energy fighting the real foe to the folks they want to help:  the failure to pursue viable software projects or markets or the failure to deliver a succesful product.  To this end, it would be much better if the time spent giving lectures on how software patents will destroy the software industry (which I note has been predicted repeatedly and without end since at least the early 1990’s while the industry nonetheless grew relentlessly over the last 20 years to gargantuan proportions with no end in sight) were instead redirected to help developers choose better projects or markets and make fewer mistakes executing on their goals.  Or, perhaps the software opponents could focus their energy on raising money to fund new research on the great new software ideas of the future and then donate those ideas to the public domain, where those ideas will be safe foreever from the perceived scourge of software patents.