In a decision dated July 9, 2020, the Intellectual Property Office of Jiangsu Province, China, punished a patent agency, Zhishi Law Firm ( 南京知识律师事务所), for a patent subject matter conflict with a public warning.  A subject matter conflict can be defined as the simultaneous representation of clients competing for patents in the same technology area for the same or similar inventions.

In the decision 苏知服罚字〔2020〕1号, the Intellectual Property Office of Jiangsu Province explained that Zhishi Law Firm, as a patent agency, after accepting the patent application of Nine X Company, accepted the engagement of Hou X Company, which has a conflict of interest with Nine X Company, to act on matters related to the same patent right. The first paragraph of Article 14 of the Patent Agency Regulations provides that after a patent agency accepts a commission, it shall not accept the commission of other parties with conflicts of interest regarding the same patent application or patent right.

Unfortunately, the Intellectual Property Office did not release details on the technology involved or how a subject matter conflict was determined.

In contrast, in Massachusetts in Maling v. Finnegan, Henderson, Farabow, Garrett & Dunner, LLP, the Supreme Judicial Court of Massachusetts concluded on December 23, 2015 “that the simultaneous representation by a law firm in the prosecution of patents for two clients competing in the same technology area for similar inventions is not a per se violation of” Rule of Professional Conduct 1.7. 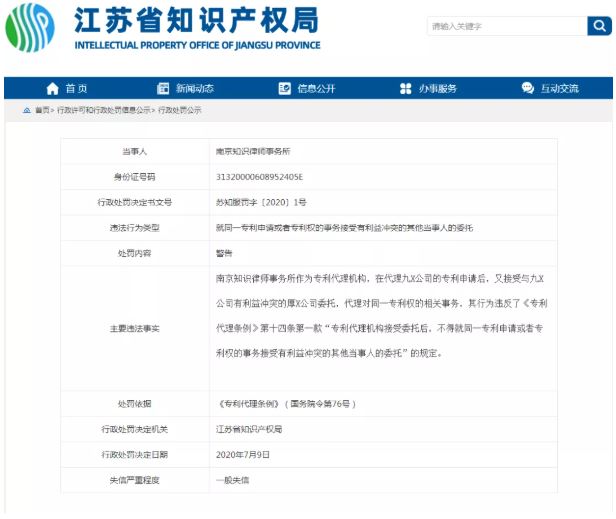