A petition for covered business method review, inter partes review, or post-grant review may  be filed on behalf of of several different parties and real parties in interest.  Typically, such filings involve one, two, or three named persons (e.g., companies) as the petitioner.  However, the Board’s rules do not state a limit on the number of persons that may sign a single petition. On October 15, 2013, thirty-five (35) companies were named in a Petition for a Covered Business Method Patent Review of U.S. Patent 8,146,077.  Agilysys, Inc. et al v. Ameranth, Inc., CBM2014-00014.  The companies named in the Petition include: 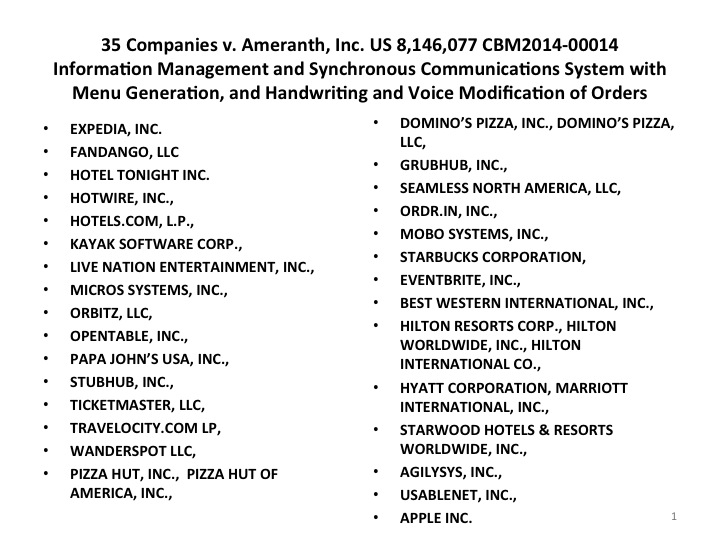 The Patent Trial and Appeal Board (PTAB or Board) used this Petition to clarify its position on petitions naming several parties and real parties in interest. Id., Paper 11 (February 11, 2014).  The Board clarified that the Petition may name several companies, but that each cannot separately appear and independently participate:

Counsel for Petitioner proposed that the thirty-five companies would file a single paper, sharing the pages among themselves, and in the event of differences  in the positions of the different companies, there would be one or more separate sections in the paper to articulate the differences.  Counsel for Patent Owner objected to this approach.  The Board agreed with Patent Owner:

The manner of conducting this proceeding, as proposed by [Counsel for Petitioner], is not in accordance with the rules governing trial practice and procedure before the Board. The thirty-five companies collectively filed a single petition, and thus, are recognized as a single party, as Petitioner, before the Board. According to 37 C.F.R. § 42.2, “Petitioner” means “the party filing a petition requesting that a trial be instituted.” In circumstances not involving a motion for joinder or consolidation of separate proceedings, for each “petition” there is but a single party filing the petition, no matter how many companies are listed as petitioner or petitioners and how many companies are identified as real parties-in-interest. Even though the separate companies regard and identify themselves as “Petitioners,” before the Board they constitute and stand in the shoes of a single “Petitioner.”

Because the thirty-five companies constitute, collectively, a single party, they must speak with a single voice, both in writing and oral representation. [Counsel for Petitioner’s] proposal transforms the “Petitioner” under 37 C.F.R. § 42.2 from a single party into thirty-five different parties. That is not only contrary to 37 C.F.R. § 42.2, which defines “Petitioner” as a single party by referring to “the party filing a petition,” but also prejudicial to Patent Owner, who potentially would have to respond to thirty-five different, possibly inconsistent, positions on every issue. Nor would the Board’s interests in the speedy and efficient resolution of post-grant proceedings be served by permitting the presentation of inconsistent positions based on the filing of a single petition.

The original Petition named fifteen pairs of lead and backup counsel.  Based on the “single petitioner” concept articulated by the Board, the Petitioner was ordered to file a paper to re-designate lead and backup counsel “by regarding itself as a single party” in accordance with 37 C.F.R. § 42.10(a) within a week of the Order entered February 11, 2014.