Blogs   |   Poisonous Divisionals — Just When You Thought It Was Safe …

Poisonous Divisionals -- Just When You Thought It Was Safe ...

This is a guest post from Malcolm Lawrence of HLBBshaw, European Patent Attorneys in Cambridge, UK.

1.1 We have identified and researched a highly significant anticipation threat to EPC patent portfolios posed by the widely used strategy of filing EPC divisionals.  We have recently distributed a full paper on this subject (see the Note at the end of the present paper) and what follows is an abridged version.

1.2  The facility for filing EPC divisionals has been widely used by applicants for many years, both to deal with non-unity and for other purposes, and very large numbers of “voluntary” divisionals were filed in the period leading up to October 1, 2010.   The threat, which has not been recognized previous to our work, is therefore widespread in effect, its discovery pointing to a common, significant omission in strategic planning of divisional filings. We have already applied the threat in EPC oppositions.

2. The Proposition and how it Operates

2.1  We postulate the disruptive original proposition that an EPC application and its divisional(s) may be mutually anticipatory where the subject-matter disclosed is materially the same (as is almost always so).

2.3  Our proposition is based on a novel fusion of two legal principles which have not previously been put together:

3.  Divisionals are not “Special” for the Purposes of Substantive Law

3.1  The key principle on which our proposition is based rejects the assumptive, and we suggest normally unconscious, idea that divisionals are special and to be treated specially for the purposes of substantive law.  We have identified a clear statutory basis, with authoritative and philosophical support, for concluding that this idea is misconceived, incorrect and of no effect; our view is that a parent and a divisional have the same capacity to come into conflict in a novelty sense as two applications which were effectively never linked: 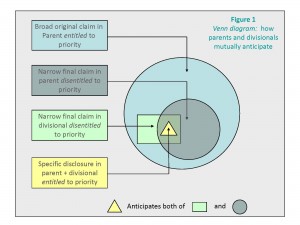 4.1  The proposition is counter-intuitive.  However, an applicant filing two separate European applications at the outset would plainly be subject to the legal reality that they could conflict in a “whole contents” anticipation sense; his position cannot fairly be superior through filing a single application and dividing it later.

5.2  On the plus side, contexts which have higher probabilities of suffering from parent/divisional mutual anticipation have characteristics which can be identified and detected, so that broad predictive risk management is possible.  Risk assessment, damage management and aggressive use of the proposition in challenging the validity of competitor patent rights are, however, issues which are beyond the scope of this outline paper.

5.3  However, our original paper on which the information here is based deals with these issues, together with very necessary more detailed explanatory background, outlining IP strategy solutions in two separate dimensions:

Ask for a copy of the full original paper “Poisonous Divisionals” by sending an email to Jenny Montier and one will be sent by return.