On June 8, 2021, the United States Patent & Trademark Office issued an Order to Show Cause to Chinese Intellectual Property Law Firm Shenzhen Huanyee Intellectual Property Co., Ltd. with respect to providing false information in over 8,000 U.S. trademark applications. Specifically, the Order alleges Huanyee was “engaging in unauthorized practice before the USPTO in trademark matters, providing false information to the USPTO by means of entering the signatures of thousands of third parties on trademark submissions, and providing false, fictitious, or fraudulent information in trademark submissions with the intent to circumvent the USPTO Rules.” As a result, trademark applications prosecuted by Huanyee might be invalid. 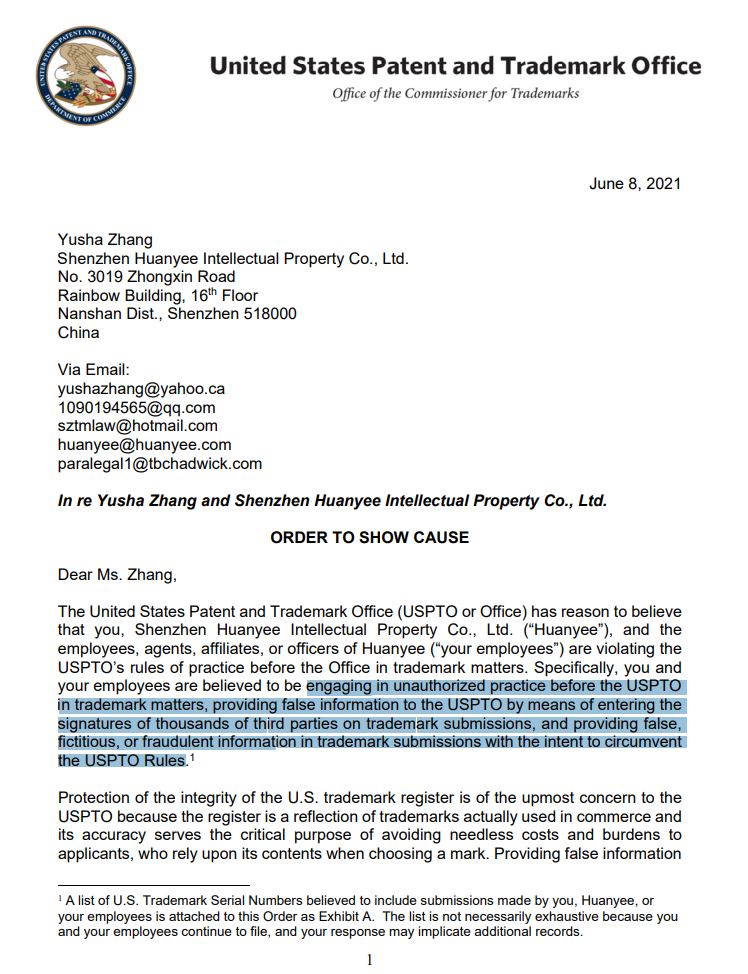 The USPTO states that Huanyee is engaging in widespread unauthorized practice of law:

Huanyee is a China-based organization that describes itself as specializing in registering trademarks in China. However, the company also boasts on the Huanyee website that it has filed more than 30,000 foreign trademark applications, including in the United States. While the Huanyee website also includes photographs of people identified as “Nyxia” and “Gaulle,” identifying them as “U.S. attorneys,” the USPTO is unaware of any U.S. trademark application or registration listing an email address associated with Huanyee that includes attorney information for any such persons. Indeed, the USPTO could not locate any information to suggest that you or any of your employees are attorneys qualified to practice before the USPTO in trademark matters.

Between 2016 and 2019, you and your employees were routinely practicing before the USPTO in trademark matters, despite the fact that at all relevant times the USPTO Rules provided that only attorneys licensed in the United States are authorized to represent others. Available information indicates that you counseled and gave advice to clients in contemplation of filing a trademark application and other documents before the USPTO, prepared and prosecuted applications for trademark registration, prepared and submitted arguments and amendments in trademark matters, and communicated with the Office on behalf of clients. When completed by a non-attorney on behalf of a third party, each of these actions constitutes the unauthorized practice of law in violation of USPTO Rules. After the USPTO implemented the U.S. Counsel Rule on August 3, 2019, to require foreign-domiciled applicants in trademark matters before the USPTO to be represented by attorneys licensed to practice law in the United States, you and your employees violated this rule and continued to violate other USPTO Rules, including by concealing your involvement in the prosecution process.

Further, Huanyee is responsible for improperly entering the
signatures of others and providing false, fictitious, and/or fraudulent
information in trademark submissions to the USPTO:

The implementation of the U.S. Counsel Rule barred the practice of foreign filing firms acting as correspondence intermediaries, necessitating foreign filing firms to refer clients seeking U.S. trademark registration to be represented by attorneys licensed to practice in the United States for all submissions to the USPTO. However, the USPTO has evidence to suggest that you and your employees continued to practice before the Office and conspired with others to circumvent the USPTO Rules by improperly entering the signatures of others and providing false, fictitious, and/or fraudulent information in trademark applications.

Since last year, users must register for and use a MyUSPTO account to access electronic forms and submit trademark documents through the Trademark Electronic Application System (“TEAS”). Your name appears in registrations for three different MyUSPTO accounts, registered to the email addresses 1090194565@qq.com, sztmlaw@hotmail.com, and paralegal1@tbchadwick.com. Office records reflect that your accounts are responsible for filing over 8,000 pending trademark applications, and that users of your accounts have filed amendments and responsive documents in many more trademark application and registration records, despite the fact that you are not an attorney and not otherwise authorized to make submissions on behalf of others in trademark matters.

Information about the submissions made from your MyUSPTO accounts indicate that the same person or entity is using these accounts to enter signatures of others. While the documents routinely appear to have been electronically signed by applicants or attorneys directly on the electronic form, the fact that the submissions are often filed in rapid succession and are signed by different individuals with mailing addresses in diverse geographic regions is strong evidence that you or your employees must be entering the electronic signatures of others on the TEAS forms. For example, during a one-hour time period between 2:29 a.m. (Eastern) and 3:29 a.m. on May 14, 2021, one of your MyUSPTO accounts was responsible for submitting four new TEAS Plus applications and five responses to Office actions, each with a declaration attached and identifying a total of seven different alleged signatories who, according to the TEAS forms, personally entered their electronic signatures.

… It is implausible that each signatory, allegedly located thousands of miles from each other, was present to personally enter their electronic signatures on these TEAS forms during the same single hour.

Your MyUSPTO accounts are also responsible for filing TEAS submissions at a frequency that would make it improbable and likely impossible for a single person to fill out the forms, let alone coordinate the personal entry of electronic signatures on TEAS forms by seemingly unrelated parties. On March 16, 2021, alone, your accounts were responsible for filing 201 different TEAS forms, most within minutes of each other, with several submitted mere seconds apart…Based on the volume and speed of submissions originating from your accounts, we presume that you are sharing access to your MyUSPTO accounts with others in violation of the Terms of Use for USPTO Websites.

Both the Rowland Heights and Colorado Springs addresses are merely commercial mail receiving agencies, capable of forwarding or scanning mail for people or entities located elsewhere in the world. These addresses are not valid domicile addresses for these applicants. Only when challenged further have you or your employees designated attorneys Shan Zhu or Yi Wan and provided domicile information that suggests the applicants are actually located outside the United States. … Based upon the multiple attempts to provide false domicile information for entities located outside the United States, and the reluctance to list an attorney of record until challenged, the USPTO can only conclude that you and your employees have been providing false, fictitious, and/or fraudulent information to the USPTO in an effort to obfuscate the applicants’ foreign domicile addresses with the intent to circumvent the requirement for U.S. counsel…

Based on the foregoing, the USPTO has reason to believe that all applications and trademark documents filed via your MyUSPTO accounts were filed in violation of the USPTO Rules and are invalid. The applications and documents were not properly signed, appear to have been submitted without the owner or any identifiable authorized person making reasonable inquiry into the factual contentions contained therein, and likely contain false, fictitious, and/or fraudulent information. Available information also indicates that such submissions were filed with an intention to circumvent the USPTO Rules including, but not limited to, 37 C.F.R. §§ 2.11(a), 2.193, 11.14, and 11.18(b). In addition, USPTO records indicate that these submissions were made using the MyUSPTO system and TEAS in contravention of the Terms of Use for USPTO Websites.

The USPTO listed sanctions are:

The deadline for Huanyee to respond is June 22, 2021.  No word yet whether Huanyee responded but in the meantime, their website is down but their WeChat social media account is still active.

Huanyee was presumably trying to avoid the costs of retaining a U.S. lawyer in order to profit from government incentives for trademark registrations as as earlier reported by the USPTO. In fact, in April 2021, Huanyee explained in a social media account posting Shenzhen’s policy for trademark subsidies of up to 3,000 RMB (~$464 USD)  per trademark.   It is unclear if applicants will need to repay the subsidies if the trademarks are invalidated.

Due to the sheer number of trademark applications listed in two columns over 107 single-spaced pages, this Order has also been subject of much commentary in Chinese social media postings (e.g., here and here).

The full text of the Order is available here.