Check out the weekly stats coming from the PTAB and read our attorney case reviews. 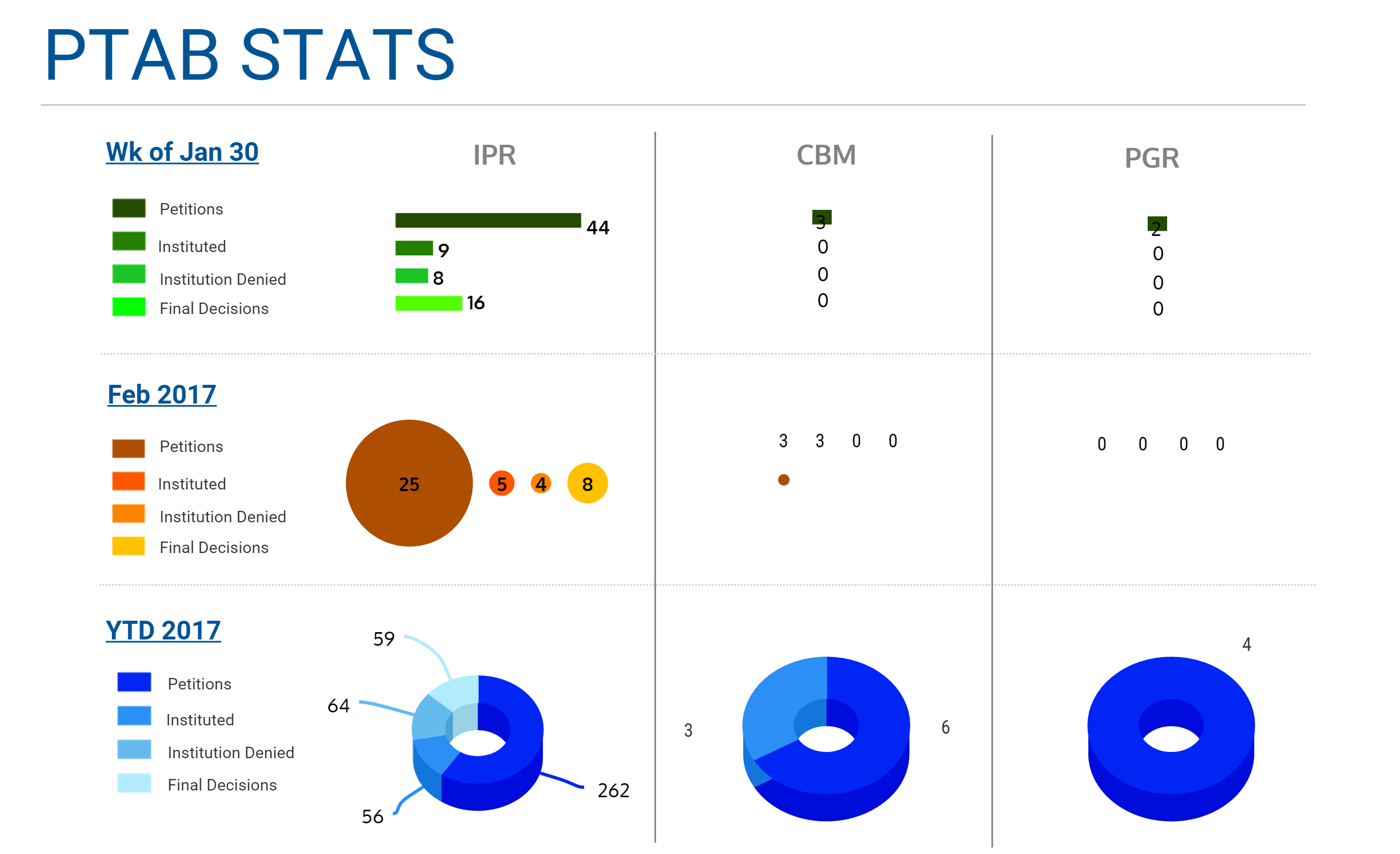 Check out PTAB E2E to view any of the above cases.

The Patent Trial & Appeal Board (PTAB) has decided its first Post Grant Review (PGR) under the American Invents Act, where it upheld the validity of the challenged patent. In the three prior PGR’s the Board had invalided the patents under the Alice standard for statutory subject matter under Section 101. (Alice Corp. v. CLS Bank International, 573 U.S. __, 134 S. Ct. 2347 (2014))

PGRs are challenges available before the PTAB to patents which were granted under the first-to-file standards of the AIA, which have effective filing dates after March 16, 2013. Unlike Inter Partes Reviews (IPRs), where patents can only be challenged under Section 102 and 103 on the basis of patents and printed publications, PGRs challenges can be made for all invalidity reasons, other the best mode, and on the basis of all available prior art. This case illustrated the breadth of challenges for PGRs, and the concomitant difficult evidentiary issues which can arise with other types of evidence. Patent and printed publication are generally clear on their face, while prior art such as prior sales can raise additional evidence questions.

Here the petitioner, Altaire Pharmaceuticals Inc. challenged the patent as obvious over the prior public sales Altaire had made of its own products. The invention is a way to maintain the high purity of an eye care solution product. Altaire needed to establish that its prior solutions had certain purity limitations in order to invalidate the patent, construed under the broadest reasonable interpretation standard, which is the standard for claim construction for patents in the PTAB. (Cuozzo Speed Technologies, LLC v. Lee, 579 U.S. ____ (2016)) The decision turned on the data that Altaire had proffered to show the purity of its prior art products, and specifically the test data that Altaire had submitted to establish their purity.

Regarding the evidence that Altaire submitted, the Board reviewed the purity data, and the witness used to support it, and held that Altaire had not timely qualified its witness as an expert in the PGR proceeding, and thus could give no weight to his opinion. Regarding the test submission, the Board held that Altaire had not explained how the test was performed, and the resulting data generated, and thus it could give not give weight to this data evidence.

Altaire had attempted to qualify its executive, Mr. Sawaya, as an expert witness in its reply brief, after the patent owner had challenged the witness’s testimony as being from a fact witness, since the same executive had submitted a declaration in support of the initial PGR petition as a fact witness. The Board, citing its Rule, 37 CFR 42.23(b) that “a reply may only respond to arguments raised”, said that

“respond,” in the context of this Rule, does not permit Petitioner to depart from the positions originally taken in the Petition and embark in a new direction with a new approach. … Here, Petitioner intends to revise the witness status of Mr. Sawaya from a lay person to an expert. This change would affect what subjects on which Mr. Sawaya may testify competently. For example, under Federal Rule of Evidence 602, a witness may testify only to a matter of which he has personal knowledge. In contrast, “[a]n expert may base an opinion on facts or data in the case that the expert has been made aware of or personally observed.” Fed. R. Evid. § 703. As a result, while an expert may testify on certain topics, such as prior art teachings or the level of ordinary skill, a lay witness may not do so. Because retroactively qualifying Mr. Sawaya as an expert at the time of the Reply would impact our treatment of the testimony he provided in support of the Petition, and because Patent Owner did not have the opportunity to consider and respond to Mr. Sawaya’s prior testimony in that capacity, we decline to do so at this late stage. [Paper No. 48. p.7]

Regarding the test data submitted to show the prior art purity, the Board found it insufficient, stating:

[t]he tests and data submitted with the Petition do not meet the requirements of 37 C.F.R. § 42.65. Our Rule requires that: If a party relies on a technical test or data from such a test, the party must provide an affidavit explaining: (1) Why the test or data is being used; (2) How the test was performed and the data was generated; (3) How the data is used to determine a value; (4) How the test is regarded in the relevant art; and (5) Any other information necessary for the Board to evaluate the test and data. 37 C.F.R. § 42.65(b). Here, Petitioner relies on the HPLC data to show that Altaire’s Product meets the chiral-purity limitations of claim 1. The …only declaration submitted with the Petition— however, fails to explain, among others, how the test was performed and how the data was generated.[Id. at p. 14]

This decision illustrates the difficulties that the parties face in PGR proceedings, where the prior art evidence can take many forms. In IPRs, only printed publications and patents are available, which are much clearer and easier to authenticate. Here the petitioner could, in the view of the Board, have done a better job of explaining the evidence according to Rule 42.65. In addition, Petitioner could have moved to qualify its executive as an expert before the Board, giving notice of its intentions, and an opportunity for the patent owner to respond, but failed to do so. (37 C.F.R. § 42.123. Filing of supplemental information.) The Board has been clear that it doesn’t allow surprises, sometimes characterized as “sandbagging,” with arguments and evidence in reply briefs.

With the burden of persuasion on the Petitioner to show unpatentability by a preponderance of the evidence in a PGR, 35 U.S.C. § 326(e), the evidence and its presentation methods, become critical.